Thank you so much for your continued prayers for my safe passage to Australia. I managed to have all the right paperwork and get on the plane!!! It was a whole new travel experience and I’m thankful that everything fit into place. There were many strange things but probably the most bizarre was flying on a plane from Singapore to Sydney with only 12 other passengers in Economy!!! The flight attendants called us by name and were extremely attentive as there were almost as many of them as there was us. Arriving in Sydney was also very smooth and after hearing so many horror stories about hotel quarantine, I am very happy to report that the Novotel in Darling Harbour is not one of them 😊

Before I left
I think I have already mentioned how leading Youth Group at church has been a blessing throughout the pandemic. This last month I have been even more encouraged. As part of the handing over of my leadership to Hina and Maya, it also coincided with us finishing 1 Samuel (it’s been just over a year since we started). We asked the kids what they wanted to study next, whether it be a book of the bible or a series, and gave them a week to think about it. When we met up the next week, they were asked for their suggestions. Our year 7 boy said ‘I want to read Ezra and understand more about the background.’ As you can imagine the new leaders were a little bit terrified. Although they are both strong Christians, this is their first time to lead this age group, and one her first time to teach any group and Ezra is not really somewhere you would normally start. The kids also decided that because it was Summer Holidays and they all had more time than usual, that they would take it in turns to lead. In preparation they’d meet with the associate pastor for about 1 hour during the week for him to help them. Before I left, I had the opportunity to participate in 3 of these studies and I was so impressed. They didn’t just regurgitate the information that they had learnt but engaged with the other members, helping them to understand the things they themselves had learnt. They are a fantastic bunch of kids and if felt like a really great note to leave on.

On the KGK front, we had our Summer Camp online from the 17th to 20th of August. Although the preparations were hectic in the preceding weeks, it turned out to be a wonderful time. 69 students attended, 5 who were non-Christians and another 5 who were new to KGK. There was also a large number of 1st and 2nd year students which is such an answer to pray since we have been online-only since they started university. The talks were both encouraging and challenging and I had the opportunity to lead an elective on ’What does the Bible say about money?’ Chatting to some of the students afterwards, a number said the camp had been the highlight of their summer and a much needed encouragement to persevere.

Looking forward to catching up with many of you over the coming months (whether online or, God-willing, in person). Please consider signing up for CMS summer school this year which will again by a hybrid online/face-to-face (covid permitting) week of Bible teaching and fellowship, focusing on God’s mission. https://www.nswsummerschool.org.au

• a safe and uneventful journey and a great place to spend my 2 weeks quarantine
• the youth group and their eagerness to study the Bible together, even the more difficult parts
• KGK Summer Camp and the encouragement it was to the students

• for me to settle into life in Australia and have opportunities to connect with people
• for those who are taking on my ministry responsibilities while I’m away, that it won’t be too burdensome

Picture: Scored a comfy seat in Changi Airport to wait out my 4 hour layover😊 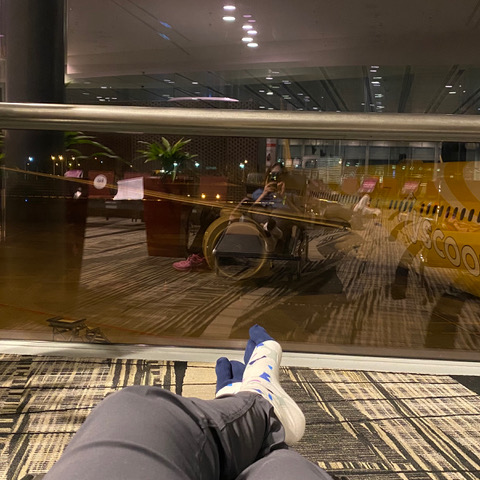